In 1901, Dr. Alois Alzheimer, a German psychiatrist and neurologist, examined a patient with a  mystifying case of progressive memory loss. He determined that she had a pathological form of  dementia—what we now know to be Alzheimer’s disease.

Today, Alzheimer’s is classified as a degenerative disease of the brain and is ranked as the seventh  leading cause of death in the U.S. and the most common cause of dementia among older adults.  According to the Alzheimer’s Association, more than 6 million Americans are currently living with  the disease—and the number is projected to rise to nearly 13 million by 2050. Additionally, the  Alzheimer’s Association says more than 11 million Americans provide unpaid care for people with  Alzheimer’s or other dementias.

There are treatments that can temporarily delay the symptoms of the disease, but there is currently  no cure. But that may change soon, as there is a vigorous effort underway to change the trajectory of  the disease.

That’s why Joanne Foxxe of Keller Williams Realty Maui has participated in the annual Walk to End  Alzheimer’s for the past four years. Held in communities across the country, the event raises funds  for the Alzheimer’s Association and its mission-related initiatives of care, support, and research. The  nonprofit has chapters nationwide, including the Alzheimer’s Association Hawaii Chapter, which  serves the entire state. The Alzheimer’s Association actively works to eliminate the disease through  advancements in research and aims to reduce the risk of dementia through the promotion of brain healthy lifestyles. It also facilitates workshops, support groups and one-on-one consultations for  those diagnosed with Alzheimer’s and their caregivers.

On Maui, the 2022 Walk to End Alzheimer’s took place on Saturday, Oct. 22, at Keopuolani Park in  Kahului. It was the first in-person walk since 2020 and it drew 41 teams and 244 participants. Thanks to their efforts, this year’s event raised more than $85,000, exceeding an initial fundraising  goal of $80,000. All of the proceeds will stay local to support families and individuals impacted by  Alzheimer’s disease and other types of dementia. “We had a good turnout, and I am hoping for even  more next year,” Foxxe said. 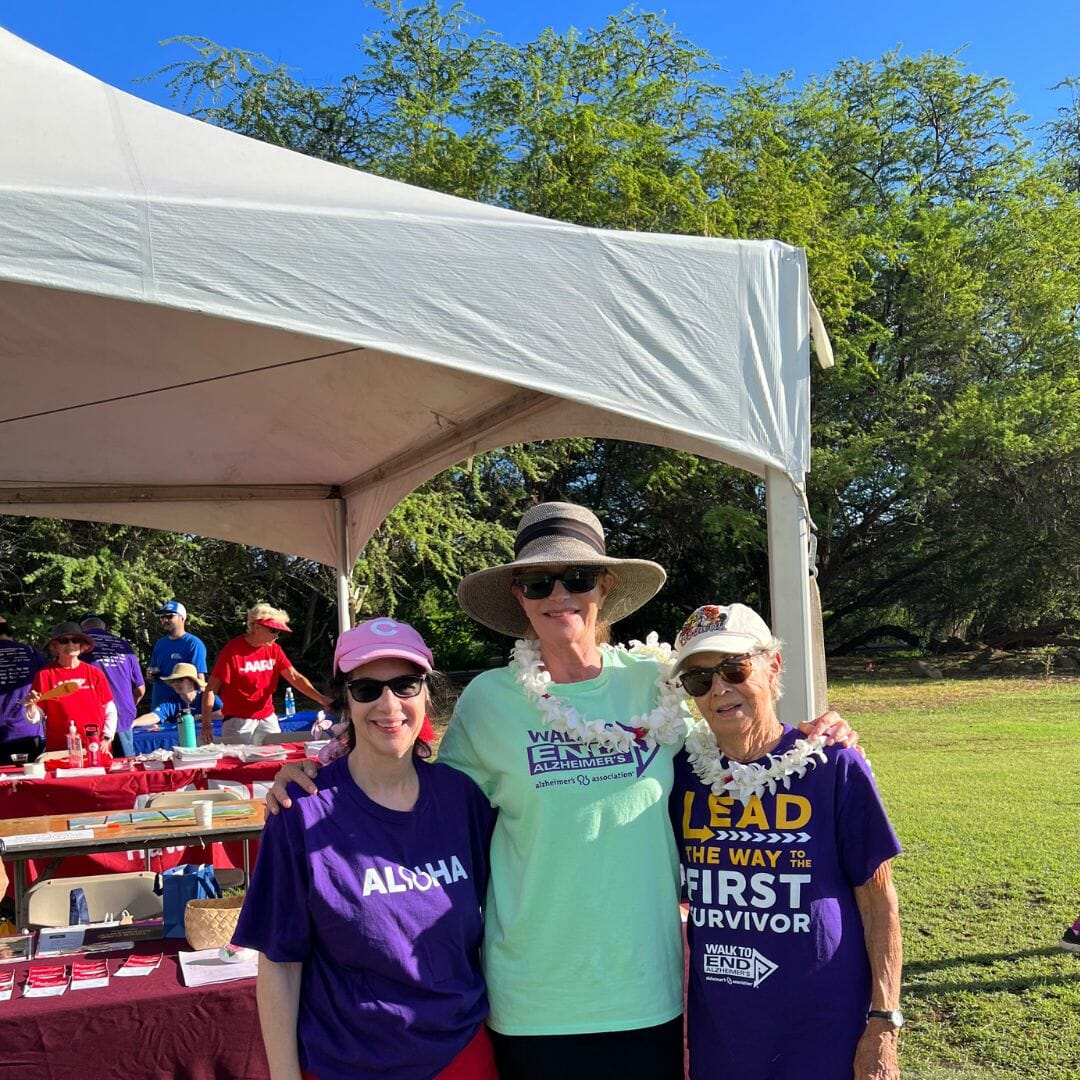 Realtors Association of Maui member Joanne Foxxe (center) and (from left) Heidi Henshel and  Sandy Rogers want to see a world without Alzheimer’s disease. On Oct. 22, the trio took part in the  Walk to End Alzheimer’s, an annual event that raises awareness and funds for Alzheimer’s care,  support, and research.

For the fourth year in a row, Foxxe and her fellow “Maui CRS” teammates laced up their walking  shoes to help the Alzheimer’s Association continue its important work. This year, the team raised  nearly $3,000 for Alzheimer’s care, support, and research. “During COVID, we did not have our big  walk. This year was so special to have it in person,” she said. “We have many participants  whose lives have been touched by this terrible disease.”

Recently, a new color was introduced: white. You will only find a single white flower at each walk,  and it is an emblem of hope. According to the Alzheimer’s Association, “It is raised as a symbol of a  person we do not know yet… this one flower represents the first survivor of Alzheimer’s disease.”

Do you know a Realtors Association of Maui member who should be recognized for their contributions to the  community? If so, send your story idea to Sarah Ruppenthal at missruppenthal@gmail.com.